Watching The Assassination of Katie Hopkins gives you an observer’s view on our media-saturated society. As soon as you enter into the auditorium, a set covered in smartphones greets you. Once the play starts, these smartphone walls light up and provide a backdrop onto which further projections take place. In front of this, the live dialogue flicks from one actor to the next, replicating the instant rolling news that has become a staple of our media culture. It is quite an overload of action and information. So to sit back and experience it in this way certainly helps to reflect on one’s own participation in this increasingly-mediated world. This is why The Assassination of Katie Hopkins is an important play.

It is also an important play as it challenges all sides in the debate on freedom of speech. For those liberals hoping for a damning criticism of Hopkins and her right-wing cronies, you will be thoroughly disappointed. Yet this is all the more reason to go. When the news of Katie’s assassination comes through, co-protagonist and Human Rights intern Kayleigh (Bethzienna Williams) is tasked with writing something positive about her in response to such an unlawful, illegal action. What starts out as the forced phrase “A Strong Unapologetic Woman” soon turns into a full-blown campaign that demands #Justice4Katie. What follows is a fascinating discourse on the machinations of the media; both its wielding power and its superficial nature.

Williams is excellent in her first professional stage role. Alongside Maimuna Memon, who plays Shaima, the two lead the show like seasoned actors. They are both completely grounded in their respective roles, bringing empathy, humour and anger in such perfect measure to create well-rounded characters with very complex views. On one level, they can be seen as representations of the polarisation so prevalent in much contemporary public debate. On another level, their narrative arcs reveal a much deeper layer of thought, reflecting the oft-contradictory nature of human beings. Both characters wrestle with their struggles and insecurities. Both are impassioned and stand up for their beliefs. And both are attempting to fight against a social order that appears to be dominated by the divisive tendencies of consumer capitalism.

With more than a nod to Black Mirror here, The Assassination of Katie Hopkins is a great attempt to get us to think more consciously and critically about our current society. It does so in such a way as to entertain us at the same time. Filled with an excellent array of original songs, its identity as ‘a new musical’ is one to be welcomed. They are catchy, punchy and, though not wholly memorable, thoroughly enjoyable within their context. It is certainly a great advert for British musicals. And considering it’s probably been financed at a pittance compared to the giants from America (Wicked, Hamilton, and so on), it manages to hold its own very well. 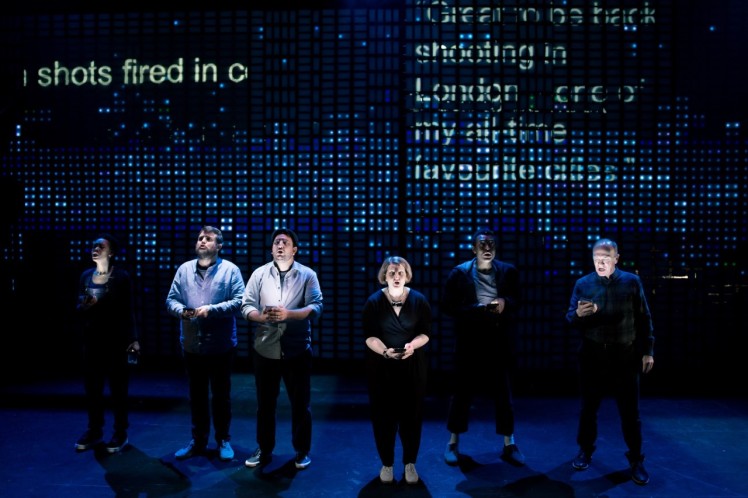 In a culture absorbed by social media, full of comment and opinion, The Assassination of Katie Hopkins could perhaps be seen as an attempt to call us, for once, to shut up and listen. It’s time to exit our echo chambers and really, truly engage with those whom we disagree with, even hate. It may be uncomfortable. It may be challenging. But it may just be the best thing we do. And it starts by going to see this play. It says so much about contemporary society. As such, there is so much that could be said about it too. But the best advice I can give is to go and experience it for yourself. Trust me, you won’t regret it.

Find out more about the show here.